The purpose of the Public Information Meeting is to introduce the project to the community, gather initial comments from the public, identify the needs for the project, and help identify concerns about the improvements or impacts to the natural and human environment. Your feedback is a very important component of the project development process.

Charleston County, in cooperation with the South Carolina Department of Transportation (SCDOT), proposes to make improvements to Hwy 78 from Rivers Avenue (US 52) to Berlin G. Myers Parkway (SC 165).

The Hwy 78 Corridor Improvements project runs along the Hwy78 corridor from Rivers Avenue (US 52) to Berlin G. Myers Parkway (SC 165).

The BCDCOG Lowcountry Rapid Transit (LCRT) project is within the project limits from the Exchange Park & Fairgrounds to Rivers Avenue (US 52). The LCRT project within these limits will be accounted for in the Hwy 78 Project and is anticipated to be constructed before Hwy 78 improvements go to construction.
View Graphic

Charleston County will continue to develop and refine the Project Purpose and Need with the project team, local and federal government agencies, and stakeholders based on data gathered during Phase 1 of the proposed project. The Purpose and Need as currently defined is described below.

The purpose of the proposed project is to accommodate projected increases in traffic volume by improving roadway capacity, efficiency of key intersections, and system continuity throughout the project limits. This section of roadway serves as a principal arterial that has historically experienced an increase in traffic due to regional growth and currently sustains operations that exceed the capacity of the current roadway system which are projected to worsen over time.

Due to the unknown environmental impacts associated with the proposed project, this project will be divided into multiple phases. Phase 1 will include the notice of intent, project scoping, and studies required to determine the appropriate level of NEPA documentation. Subsequent phases of development will be at the discretion of Charleston County based on the results of the first phase. The anticipated proposed milestones are listed below.

The National Environmental Policy Act (NEPA) is a federally-mandated environmental review process for any project requiring federal action. The NEPA process helps the project team to avoid or minimize impacts to the human and natural environments and reach a decision that best meets the needs of the community stakeholders. A project’s purpose and need guides the NEPA process and ultimately serves as the criteria used to screen alternatives and identify a preferred alternative for the project.

The following Traffic related tasks would occur during Phase 1:

In 2019, after reviewing traffic studies for the Lowcountry Rapid Transit project, Charleston County identified that the 3 intersections at Hwy 78 at College Park Road, Hwy 78 at Ladson Road, and Ladson Road at College Park Road are key to traffic delays experienced in the corridor. Conceptual studies for improvements at those intersections were developed to study in more detail as part of the Hwy 78 project design and NEPA evaluations. The traffic study that was completed before the Hwy 78 Project began included four alternatives consisting of multiple configurations were proposed to help alleviate current congestion experienced at these intersections and a traffic analysis was performed to review each configuration. It was found that Alternative 2 and Alternative 4, as presented here, would provide reduced traffic backups in the design year of 2045. One of these two alternatives will be selected based on traffic analysis, impact analysis, costs, and public input and will be incorporated in alternatives for the overall corridor.

Below is a summary of the improvements of the 2 alternatives with graphics on the following sheets. 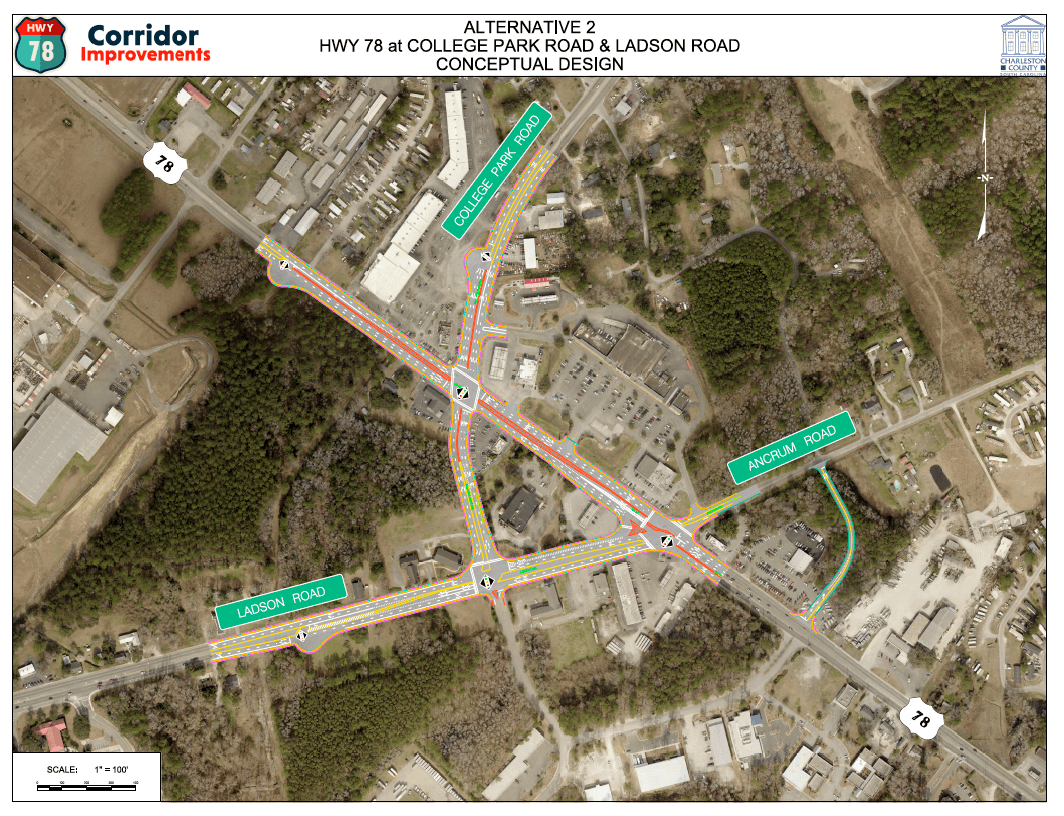 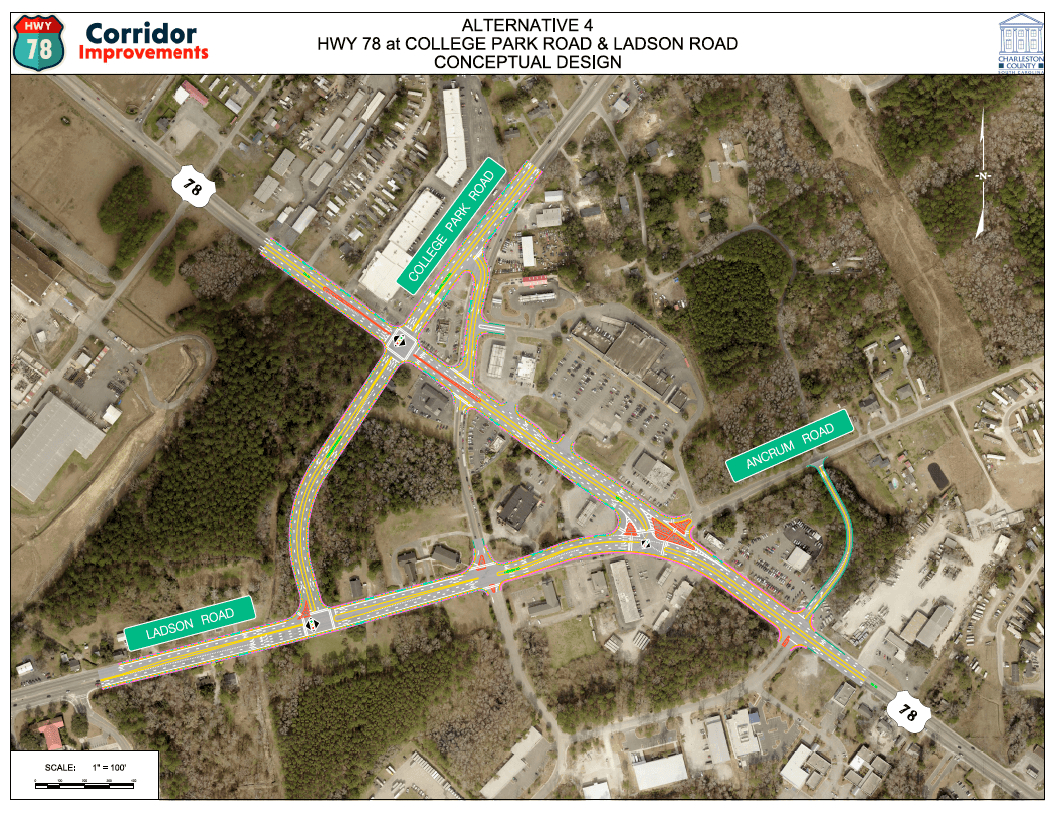 Your comments and suggestions are welcomed and are important to the development of a quality transportation project.
Note: Information provided, including name and address, will be published and is subject to disclosure under the Freedom of Information Act.  Written comments will be accepted through September 30, 2021 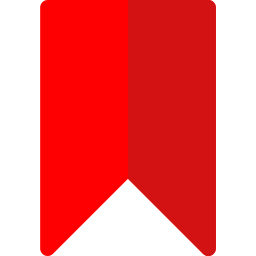